Software as a service (or SaaS) is a relatively new model of how a lot of software companies are conducting their business today – often to great success. So it comes as no surprise that malware writers and cyber crooks are attempting to adopt this model for their own nefarious purposes. In the past year a whole bunch of these “Ransomware as a Service” campaigns appeared, like for example Tox, Fakben or Radamant. Today we want to spotlight the newest of these campaigns.

At first glance Ransom32 looks like a dime a dozen among many similar malware campaigns. Signups are handled via a hidden server in the Tor network. A simple Bitcoin address where you want the funds generated by your ransomware to be sent to is enough to signup.

After you type in your Bitcoin address, you will get access to the rudimentary administration panel. In the admin panel, you can get various statistics, like for example how many people already paid or how many systems were infected. You can also configure your “client”, which is their term for the actual malware. It is possible to change the amount of Bitcoins the malware will ask for, as well as configure parameters like fake message boxes the malware is supposed to show during install. 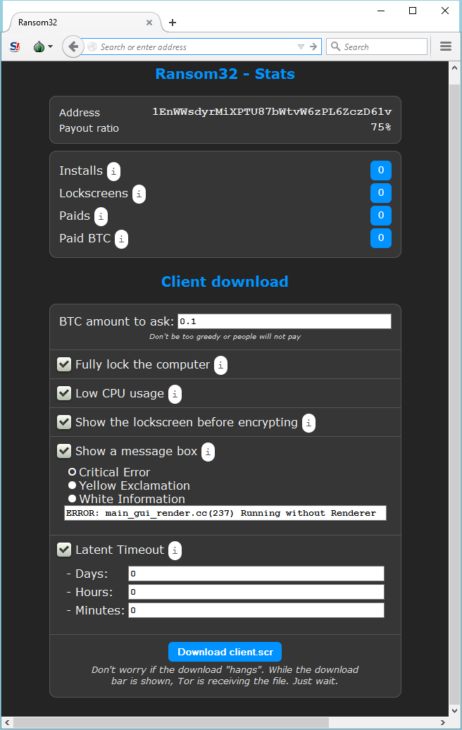 A click on “Download client.scr” will then generate the malware according to the specifications and will start the download of the more than 22 MB large malware file. At this point it becomes evident that Ransom32 is very different to other ransomware, which rarely exceed 1 MB in size. In fact, most ransomware authors use the small size of their malicious files as some kind of unique selling point when advertising their campaigns in underground hacker communities. Ransom32 definitely had our interest.

After further examination the downloaded file turned out to be a WinRAR self-extracting archive: 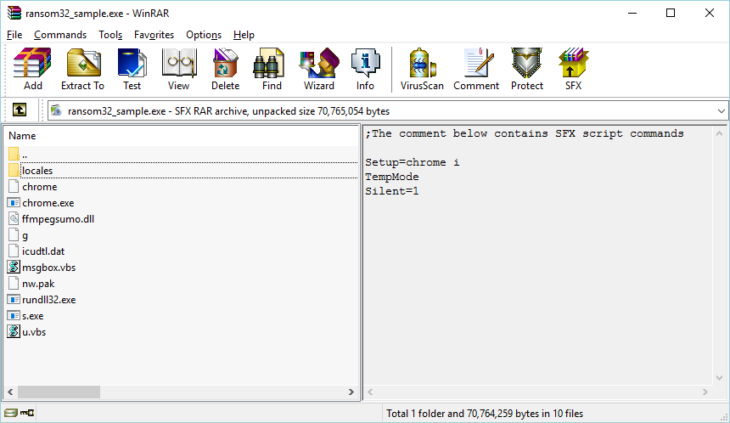 The malware uses the script language implemented in WinRAR to automatically unpack the content of the archive into the user’s temporary files directory and execute the “chrome.exe” file contained in the archive. The files within the archive have the following purposes:

The “g” file contains the malware’s configuration formatted as JSON

The most interesting part by far in that package is the “chrome.exe”. Upon first inspection, “chrome.exe” looks suspiciously like a copy of the actual Chrome browser. Only the lack of a proper digital signature and version information hints that this file is not the actual Chrome browser. Upon further inspection, it turned out that this file is a packaged NW.js application.

So what is NW.js exactly? NW.js is essentially a framework that allows you to develop normal desktop applications for Windows, Linux and MacOS X using JavaScript. It is based upon the popular Node.js and Chromium projects. So while JavaScript is usually tightly sandboxed in your browser and can’t really touch the system it runs upon, NW.js allows for much more control and interaction with the underlying operating system, enabling JavaScript to do almost everything “normal” programming languages like C++ or Delphi can do. The benefit for the developer is that they can turn their web applications into normal desktop applications relatively easily. For normal desktop application developers it has the benefit that NW.js is able to run the same JavaScript on different platforms. So a NW.js application only needs to be written once and is instantly usable on Windows, Linux and MacOS X.

This also means, that at least in theory, Ransom32 could easily be packaged for both Linux and Mac OS X. That being said at this point we haven’t seen any such packages, which at least for the moment makes Ransom32 most likely Windows-only. Another large benefit for the malware author is that NW.js is a legitimate framework and application. So it is no surprise that even almost 2 weeks after the malware was first created, signature coverage is still incredibly bad.

Once Ransom32 arrives on a system and is executed, it will first unpack all its files into the temporary files folder. From there it copies itself into the “%AppData%Chrome Browser” directory. It uses the bundled “s.exe” file to create a shortcut in the user’s Startup folder named “ChromeService” that will make sure the malware is being executed on every boot. The malware will then start the bundled Tor client to establish a connection to its command and control server (C2 server) hidden inside the Tor network on port 85. After a successful connection with the C2 server to negotiate the Bitcoin address the affected user is supposed to send the ransom to, as well as exchanging the cryptographic key used for encryption, the malware will eventually display its ransom note. 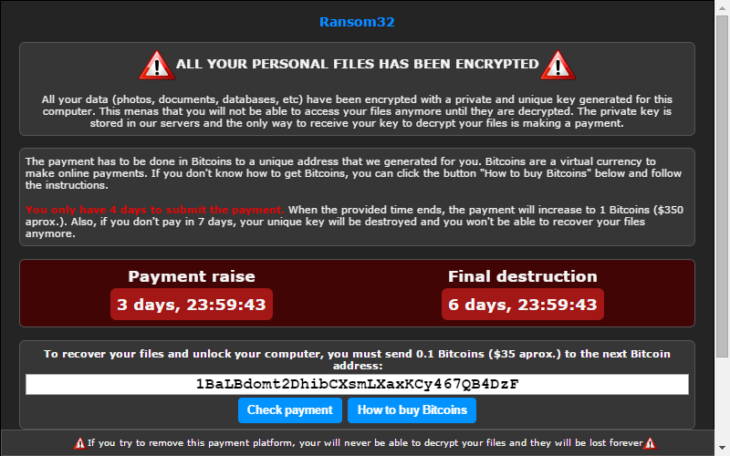 The ransom note displayed by the malware

It then starts encrypting the user’s files. All files with one of the following file extensions are being targeted:

The malware will not attempt to encrypt any files if they are located in a directory that contains any of the following strings:

Files are being encrypted using AES with a 128 bit key using CTR as a block mode. A new key is being generated for every file. The key is encrypted using the RSA algorithm and a public key that is being obtained from the C2 server during the first communication. 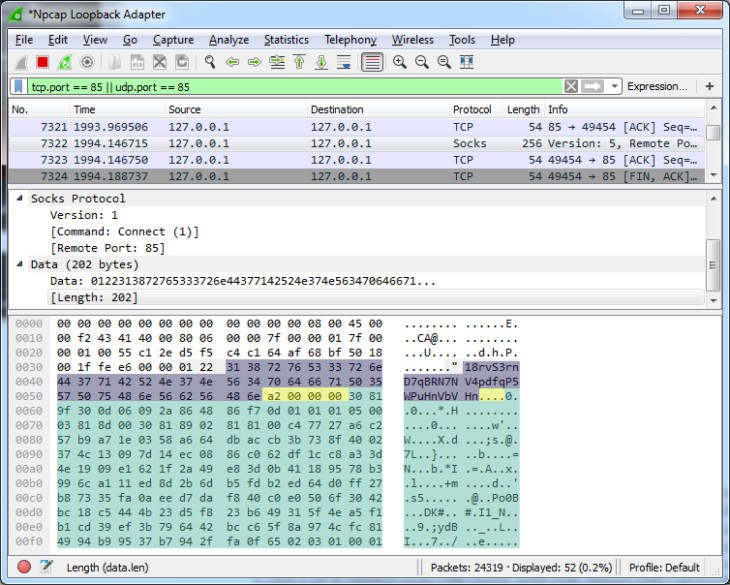 Part of the custom protocol exchange between Ransom32 and its command and control server to exchange Bitcoin address (purple) and public key (length yellow, key green)

The encrypted AES key is being stored together with the AES encrypted data inside the now encrypted file.

The malware also offers to decrypt a single file to demonstrate that the malware author has the capability to reverse the decryption. During this process the malware will send the encrypted AES key from the chosen file to the C2 server and gets the decrypted per-file AES key back in return.

How can I protect myself from Ransom32?

As explained in our recent ransomware article, the best protection remains a solid and proven backup strategy. Once again though, the behavior blocker technology used by Emsisoft Anti-Malware and Emsisoft Internet Security proved to be the second best defense, as all our users once again are protected from this and hundreds of different ransomware variants without the need of signatures. 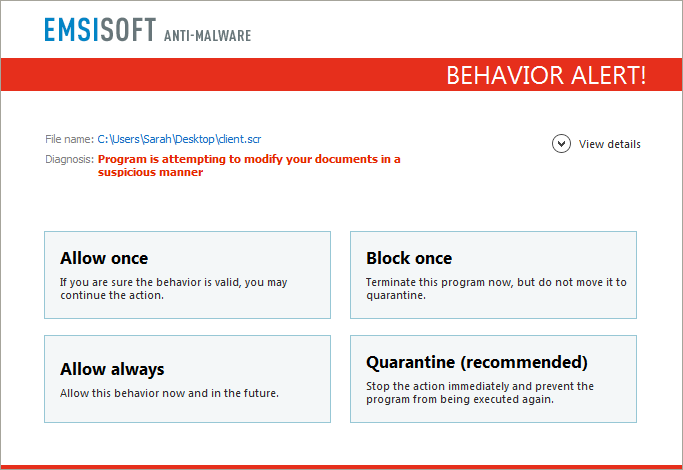 We consider ransomware one of the biggest threats of the past year and plan to do our best to continue our excellent track record in the next year, to keep our users as protected as possible.

On that note, the malware research team here at Emsisoft wishes everyone a happy and malware-free new year.

Last but not least, we want to thank our friends over at BleepingComputer, who brought this threat to our attention first. We also would like to extend our gratitude to xXToffeeXx of BleepingComputer in particular, for her invaluable help and input while researching and reverse engineering this particular ransomware.