Social Media in the Middle East 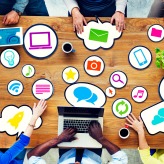 It’s possible you take your access to Facebook, Twitter and other social media platforms for granted. Maybe you’ve never thought about what a world without news feeds and constant updates and selfies from your friends and acquaintances is like. While there are moments when we’re all fed up of so-and-so’s latest attention-seeking Facebook status or their endless stream of glamorous vacation photos, the stark reality is, if our social media platforms were suddenly taken away from us, many of us would be at a loss. So what is it like to live in a country where many of these forms of communication are banned?

While China is probably the most well known country for restricting their population’s ability to view certain websites, whether through a desire to restrict access to information that might harm the country’s image or because of industry competition, there are other nations which also exercise strict control over what their people can and cannot see online.

Take Iran for example. Its citizens are denied access to Facebook and Twitter while Instagram is partially blocked due to the fact that it is possible to block individual accounts whilst leaving other parts of the platform online. Of course, anyone wanting to update their Facebook status, send tweets or upload a risqué selfie can do so using a VPN. But most VPNs charge a monthly subscription for their services and even then the access can be sketchy at best. However there is one social media platform in Iran that is freely available and that is Line, the instant messenger chat application. Unlike China which has blocked Line (something that is more to do with it being direct competition to the homegrown chat app WeChat than freedom of speech), in Iran Line is big news. In particular its social media function, called Timeline, is connecting people throughout the country, and in some surprising ways.

Texting someone is yesterday’s news, and messaging apps are the primary form of quick communication for people everywhere. And in Iran the app of choice used to be Viber – at least it was until it was blocked by Iranian officials at the end of last year. In its place came Telegram, a Russian chat app which has almost 60% of its total users in Iran. Line doesn’t currently compete with Telegram when it comes to messages, but that could change at any time, mainly thanks to some users of the latter’s penchant for spreading pornographic content.

In direct contrast to that, the Japanese owned Line is intent on maintaining its wholesome image – and Iranian companies are recognizing that and using Line as a platform to market themselves. And it’s no great surprise when you look at the numbers: well known for being one of, if not the, biggest blogging communities in the world, Iranian citizens are devout readers and creators of online content. What is particularly attractive to marketers in Iran is that a staggering 90% of people in Iran who use Line are actually active on a daily basis on Timeline.

But using Timeline in an official capacity is not as simple as merely opening an account and updating your status as it is on say, WeChat, Twitter or Facebook. Line stipulates that anyone who wants to open an ‘Official Account’ – be they a corporation or a celebrity – must apply to be a Line Partner. Line can decide whether or not to accept their ‘partner’ and, if deemed a good match for the platform, the company or person in question will then be made to sign an agreement and pay a subscription – and periodic fees. Harsh as this may seem when compared to free platforms, it is precisely this which enables Line to ensure its content is continually updated whilst also being of a permissible standard. And it is this policy of control and moderation that allows Line to operate unfettered in Iran.

So who are the Iranian celebrities who have signed up for an official Line account? The country’s first adopter was AlireSaa, a viral celebrity famous for humorous musical clips and anecdotes. At the time of signing up with Line he had around 320,000 Instagram followers – a number which took him two years to build. But after just five weeks on Line he had already beaten this – and his number of followers doesn’t show signs of abating any time soon – his fan base is already tipping the 500,000 mark.

So why is AlireSaa so phenomenally popular on Line but less so on Instagram? The answer lies in the fact that, aside from being partially blocked in Iran (although AlireSaa’s account was not) there are a number of features that Line offers to its official account holders that other social media platforms do not. One of these is Line’s ‘On Air’ sessions which uses live chat. AlireSaa used this feature to run a video contest for followers. His fans were treated to a two hour long live chat with their hero and were able to submit videos of themselves performing one of AlireSaa’s musical clips.

A staggering amount of people engaged with AlireSaa, who let’s remember is not a global superstar – 50,000 of them in fact and 10,000 of them submitted videos during the two hour window. When he announced the live chat, AlireSaa had 215,000 Line followers – a number which exploded as news of the contest spread like wildfire on the app’s Timeline feature.

If you’re still of the opinion that social media is a waste of time and can’t do anything for your business, maybe it’s time to take another look. If you want to follow in AlireSaa’s shoes and become a viral success, why not get in touch with us today. We can’t promise to make you an Internet superstar but we can help point you in the right direction.